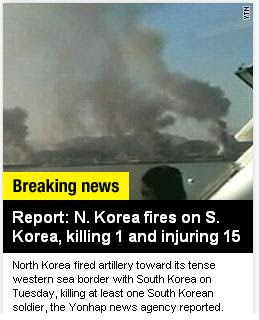 In an interview with ABC television news, President Obama said South Korea was an ''ally'' of the US.

US President Barack Obama has strongly condemned North Korea's shelling of Yeonpyeong island in South Korea and said the US would defend South Korea.

Mr Obama told ABC News that North Korea was "a serious and ongoing threat that needs to be dealt with".

The attack near a disputed sea border was also denounced by Russia, Japan and the European Union.

South Korea returned fire and threatened missile strikes if there were "further provocations".

President Obama described South Korea as an important ally and "a cornerstone of US security in the Pacific region".

He said he would not speculate on military action at this stage, but would consult South Korean President Lee Myung-bak, on the crisis.

He said: "We strongly affirm our commitment to defend South Korea as part of that alliance.

Avoid AIR ASIA at all costs